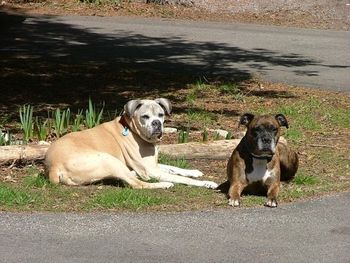 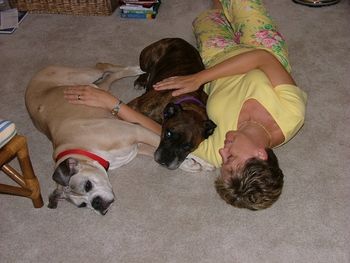 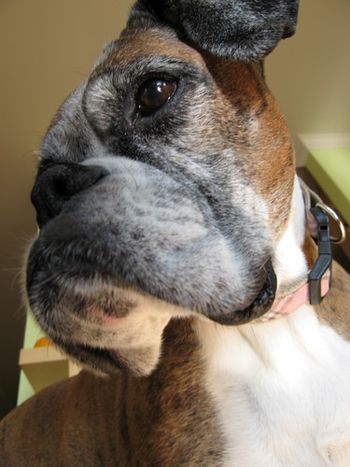 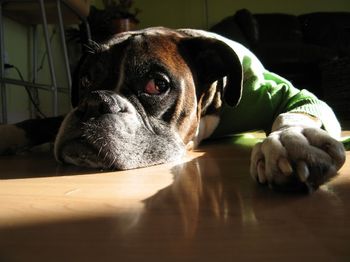 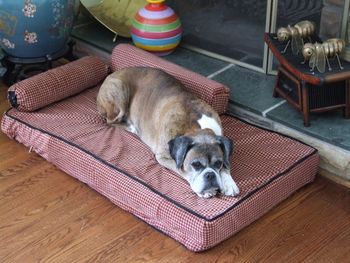 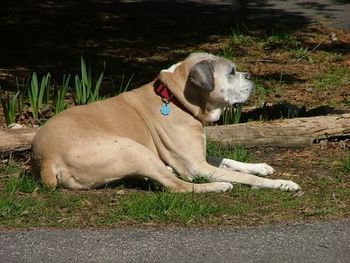 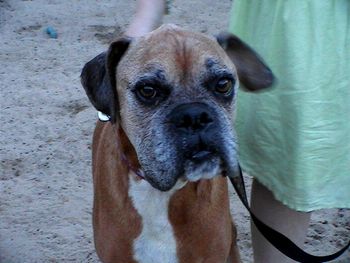 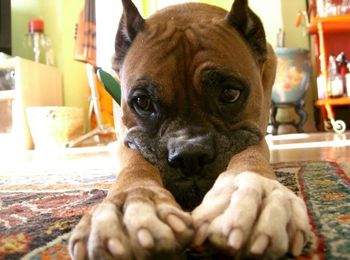 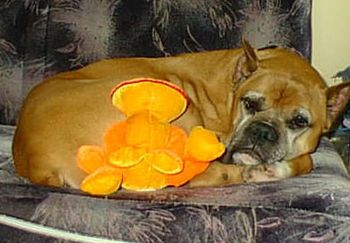 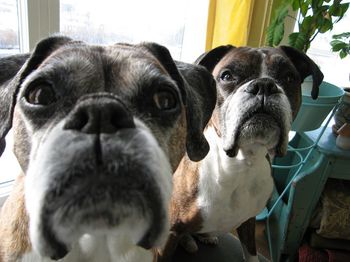 Share photo gallery
Why adopt a senior boxer? This is why... (a letter from Leigh and Karin, who adopted Charlie and Cashew, two senior sweethearts, from BRQ last year)

Both are doing well and are happy that the winter is over. Cashew doesn't like the cold (much like Karin). During the really cold days it was hard to get her to go outside to do her business. Charlie on the other hand loves the cold and romping in the snow.

We decided to get them some coats for the really cold days. Cashew, being a girl, loves to dress up and is happy to go out in the cold with her fashion coat on. Charlie, I swear to God, is embarrassed to be seen in his coat. He mopes and won't walk down the street. We soon learned that we should just put the coat on Cash and leave Charlie alone. That way they are both happy.

Charlie has very bad arthritis. His hind quarters follow him around like a drunk. But you know that we have learned lots from him. He is so happy-go-lucky and so carefree that he reminds us to make the best of every day. I have included a picture of Charlie's favorite bunny. If Charlie sees Bunny, Charlie flies off the deck and chases Bunny like a 2 year old. Of course he could never catch Bunny. But that's one of the things we have learned from Charlie, "It's not about the catching, it's the chase that counts."

We have learned lot's from Cashew also. Her motto is different than Charlie's. Cash's motto is "Find a sun spot and soak up those ray babies." She would lay in the sun for hours tanning one side then the other, if we let her.

Our neighbour makes doggie treats for all of the dogs in the area. When she takes her daily walk she drops two cookies for C&C in our rural mail box. Now, of course, whenever we go for a walk, we have to check for mail for Charlie and Cashew. They are always hopeful that their friend Judy has left them a love letter.

Charlie got skunked a couple of weeks ago. He was so forlorn. He knew he stunk and he stood patiently while I bathed him in tomato juice. That of course didn't get rid of all the smell. So Karin took him to his favorite groomer-buddy Dave. C&C got their spring baths and that got rid of the skunk smell from Charlie. It's amazing how sensitive Charlie is about his appearance. When Karin took him into Dave, Charlie moped into the store reluctantly (afraid someone would see and smell him). When Karin picked him up an hour later, he was a different guy, all happy and energetic ... "Look Karin, look. I don't stink anymore."

Charlie and Cashew make people friends wherever they go. Another lesson learned from our canine teachers: "Always stop and talk to people. They might give you a cookie."

Happy Spring from your friends, Charlie and Cashew.